You’re a hit when you marry a voice that’s gold, with a heart that is, too

You’re a hit when you marry a voice that’s gold, with a heart that is, too

Meet Dami Im – whose voice is winning as many hearts as it is uplifting.

Life is about finding a gap, then occupying it. When that gap is compassion, music bridges it beautifully.

Dami Im’s music has uplifted more hearts than chocolate has. But what many may not know about this enchanting songstress, is the work she is doing with those who have been forgotten. The sick, the old, the weak, the vulnerable.

A champion and ambassador of Sony Music’s ‘YOU CAN’ youth cancer program which fills the gap that our current health care system fails to, supporting young teens aged 16-24, who have the lowest chances, or have the lowest rates, of surviving it.

But young teens with cancer are only one of many charities Dami Im supports. She believes that the reason we are given a voice is to cheer for those who have none. From performing at fundraising charity events and gala dinners, she has never shied away from using her voice to raise money, as well as the roof, for people and causes in need of it.

In her role as an ambassador for Sony Music Australia’s, ‘You Can’ Foundation, in conjunction with Guy Sebastian and the Ten Tenors, her voice has raised as much as half a million dollars in a single night to help us battle the most frightening disease of our time, cancer.

We can win the battle against cancer medical professionals believe, but to do that people must collaborate, share findings and stories, learn, unlearn and relearn what we can all do to halt this terrible disease in its tracks. 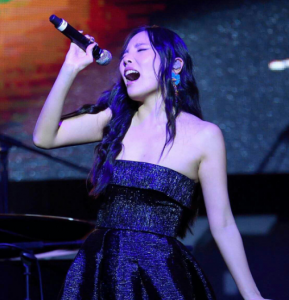 — A winner never takes it all

Music is an influence, and we can easily believe in the ABBAesque idea that “the winner takes it all”. But the reality is winners, don’t always take it all – losers do as well.

A genuine star, with a light that’s burning brighter than Sirius itself, Australia’s most applauded voice is quick to deflect credit for it to her mother, Hae Yun, a trained classical singer, with humble roots that began in Korea.

When she arrived in Australia, at the age of 9, she spoke no English and had no friends here. Hardly the perfect launchpad for a career that was to take Australia and the world by storm less than fifteen years later.

Yet, in a life and culture that was alien to her, she adapted. Her talent, dedication and perseverance were the qualities that saw her through – taking out multiple ARIA’s as well as being appointed to be Australia’s representative Voice at the 2016 Eurovision Song Contest.

— Talent and discipline are what take you to the top

Talent alone doesn’t make an accomplished musician, discipline does. And when you come from an Asian background, discipline is never something you’re ever short of.

Quick to recognise the role played by her parents, family and husband Noah, who have been her support throughout her journey, Dami Im is not just an extraordinary voice, she is a trained classical pianist who is also academically qualified in violin, flute, guitar and ukelele.

— The perfect pitch – with a soulful voice to match it

Her music teacher from the University of Queensland, remarks, that “Dami has perfect pitch and she has moved into that arena where she could sing on any note and make it sound beautiful!” And when her perfect pitch combines with her soulful singing, the result is sheer magic.

Dami herself has great advice for anyone who wants it – “Never miss any opportunities that come your way, especially if they are outside your comfort zone.”

To learn more about Dami, or even better, to hear her voice, please click her videos which you can access here at Dami Army Official Video Gallery.